Surf lifesavers have long been Australian icons, but lifesaving is now growing in popularity as an open water sport around the world. In Part 1 of A Comprehensive Guide To Surf Life Saving (See Part 2: Surf Sports) we take a look at the history of surf lifesaving, the ongoing transformation of lifesaving services and explore surf lifesaving beyond the flags.

Lifesaving through the ages

Australia is widely recognized as the international leader in surf lifesaving, and since the 1920s, the country has been involved in outreach programs to help with the development of lifesaving internationally. Game-changing lifesaving initiatives such as resuscitation techniques, jet rescue boats and prevention and rescue methods have been shared with lifesaving organisations throughout the world.

Modern-day surf lifesaving in Australia continues to adapt and grow, and new initiatives mean the country remains the gold standard in this area.

One of the key changes is that lifesaving is no longer the sole domain of volunteer ‘cubbies’; there are now more than 2,000 paid professional lifeguards patrolling the coastline from Broome in the North West to Tasmania in the South.

Employed by local councils – or contracted by Surf Life Saving Australia (SLSA) – these professional lifesavers have become big box office hits worldwide, thanks to TV shows such as Bondi Rescue, which follows the lives of lifeguards from Waverley Council in Sydney and is beamed into homes in more than 50 countries.

While the century-old message of “swim between the flags’ continues to be the core component of all public surf lifesaving safety campaigns, the message still does not get through to everyone, and there is an average of 87 coastal drownings per year in Australia.

As you would expect in this digital and technological age, the organization is supported by extensive IT systems that manage a massive membership database, real-time asset and incident tracking, online portals communicating up-to-the-minute beach safety information and VoIP radio systems that link everyone together via SurfCom satellite stations.

There is no doubt that the future of lifesaving will be guided by new technology, but perhaps the greatest change is a concerted move to “evidence-based decision making’, ensuring a professional approach to a largely volunteer movement.

Long before TV shows focused on their exploits, surf lifesavers have had iconic status in Australia and beyond. Throughout the world, the red and yellow uniform worn by ‘Bronzed Aussie Gods’ has come to symbolize a country with an unparalleled passion for the beach and the ocean.

Numerous Australian tourism campaigns have mined this uniquely Australian way of life, and recently, the SLSA underwent a rebrand, incorporating the tag-line “Australian for life’ into its new identity.

It would be easy to assume that surf lifesaving exists only to save lives, but this couldn’t be further from the truth. Not only does surf lifesaving now cover non-surf locations – such as harbours, water parks and lagoons – but members also have the opportunity to enjoy and participate in a wide range of activities.

The youngest of the surf lifesavers are dubbed ‘Nippers’. Aged between 5-13, there are 58,000 of them, and together they comprise 40% of the total membership of surf lifesaving clubs. Nippers become involved in lifesaving through the junior development programme, known as ‘Surf Ed’.

This sees Nippers take over beaches across Australia every Sunday throughout the summer, as a way to help them develop surf awareness, confidence and skills in a fun environment.

The pathways and opportunities in surf lifesaving are as diverse as the people drawn to it. Whether it’s being chief BBQ chef, patrol captain, training officer or club president, there’s a role for everyone.

A history of surf lifesaving

Before 1902 it was illegal to swim on Australian beaches during daylight hours, having been banned after 1838 due to ‘morality’ concerns.

Then, one summer day in 1902, William Gocher from Sydney openly defied this law and bathed at Manly Beach. History tells us that he was arrested for his indiscretion, but that no charges were laid.

Between 1902-1905 this single courageous action led to the repealing of local by-laws restricting bathing in daylight, and subsequently surf-bathing began to grow in popularity.

The problem with this was that most beach-goers could not swim, and there was no awareness of the surf environment and its dangers. The result was that many people drowned.

And so it was that, in 1907, the first surf lifesaving clubs emerged. Which was the first remains hotly debated, with Sydney’s Bondi SBSLSC and Bronte SLSC still arguing the toss over this. The important thing, though, was that these clubs provided patrols that reassured and protected the public as they bathed.

The ensuing 100 years or so has seen many landmark moments for surf lifesaving. There was the introduction of Bronze Medallions in 1910 for qualified surf lifesavers, although we had to wait rather longer for women to become eligible to qualify as lifesavers (1980). In 1923, meanwhile, patrol flags were first used to designate safe swimming locations. In present-day Australia there is a total of 310 surf lifesaving clubs, whose combined membership of 160,000 helps save over 14,000 lives every year. Norm Farmer AM has dedicated his entire career to national and international water safety and among many roles and titles, is recognised as a Grand Knight of the International Life Saving Federation. 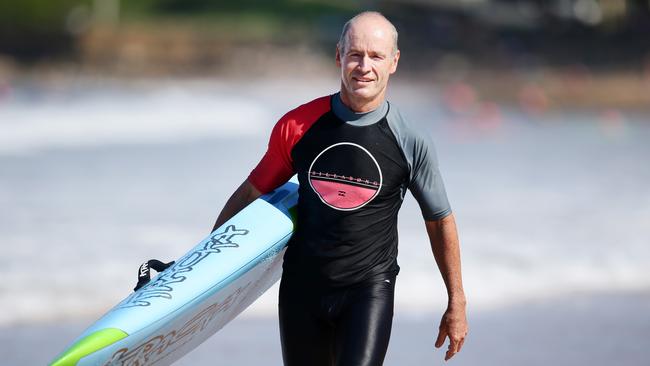 Paul Lemmon is a masters swimming & lifesaving champion and coach who embodies everything it means to be a masters athlete.