Earlier this month OceanFit was contacted by Hamro Institute of Business Technology (HIBT) who have students that come to Australia from (mainly) Nepal to study.

Nepal is a landlocked country where most people grow up without learning how to swim or how to identify dangers associated with bodies of water.

Tragically, within the last few months, six Nepalese students have drowned in Australia, and this prompted HIBT to take action and introduce a program for their students to teach them about how to stay safe when visiting the many open water location in Australia, including beaches, rivers, lakes, lagoons.

The session started by asking the students about their swimming ability, and OceanFit’s senior instructor Lia Trebilcock quickly learnt that none of the students knew how to swim or float.

One young girl told Lia that she “goes straight to the bottom’ when she tries to float. Armed with this knowledge, Lia went about helping the group understand many of the risks that aquatic environments pose, including:

Lakes/Lagoons: Slippery/sticky mud and moss, wind which can blow you away from the shore and as with rivers, a steep drop off.

Once the risks had been identified, Lia took the class down onto the sand to learn more about how the water environment works at beaches, like Bondi, and to see it all in action.

Using OceanFit’s unique sand-modelling visual teaching method, Lia created a mini Bondi Beach in the sand, which demonstrated how the sand under the water isn’t flat, but rather a collection of higher and lower areas. Higher areas of sand under the water are called sandbanks, or sandbars, and in these locations, the water will be shallower. The deeper areas in the water are referred to as channels, troughs or holes, and can these can run parallel or perpendicular to the beach.

Once the students understood this, Lia taught the students how the waves interact with these areas of shallow and deep water. As waves make their way towards the beach, if they encounter water that is shallow enough they will ‘break’. In other words, they will go from a blue-green/colour and turn into whitewater. Simply armed with this knowledge, the students were able to look at the beach, and by identifying where they could see whitewater, they could see where the sandbanks or sandbars were.

Lia explained that as the waves come in towards the shore, they bring water with them which raises the water level, this ‘excess’ water will need to balance out again, and the easiest way for this to happen is for the water to flow to the deeper channel/trough (between the shallow sandbanks) and then back out to sea, restoring balance.

Lia helped the students understand that this water rushing back out to sea is called a rip current and had them practice spotting them in the water themselves. The students were able to spot the rip currents by identifying areas with less frequently breaking waves, and calmer, generally darker looking water. Rip currents can often look like very ‘safe places’ to swim when in actual fact the opposite is true.

To summarise this section, Lia asked the students which way the water is generally heading over a sandbank and in a channel, the answers:

Sandbanks have shallow water, so there are more breaking waves, and therefore more whitewater, there. The water is moving towards the shore.

Channels are a deeper area of water and where the water will retreat out to sea again after being brought in by the waves. Therefore, the water movement here tends to be heading out to sea, or away from the beach.

Now that the students had a basic understanding of the dynamic environment at the beach, she moved on to giving the students some basic techniques they could employ when heading into the water at the beach to cool off.

Due to their limited swimming ability, Lia focused on teaching simple skills that would ensure the students could remain safe and in control when entering the water. The basic philosophy taught was to keep their feet on the ground at all times, and staying in water only as high as up to their knees. This would ensure that they are grounded, or anchored, to the seafloor when the water is moving around them and rising with the waves. If the water continued to rise, then they were advised to move quickly to shallow water as this was occurring.

Next, the students learned how to stand ‘securely’ in the water using another OceanFit favourite teaching principle, the “boxing stance’. Many unsuspecting beachgoers are knocked off of their feet by waves rushing in, and when the next wave approaches before you’re fully recovered from the previous one, it can quickly turn into a loss of control. 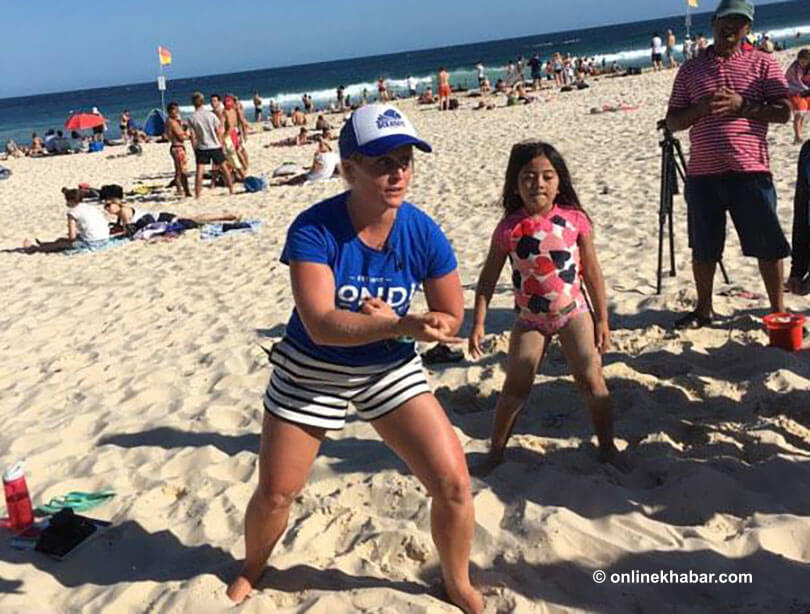 Rather than standing feet together (a very easy position to be knocked over from), Lia taught the group to widen their stance, face the waves and then bend the knees and lean forward – like a boxer standing in the standard guard position. This position gives you maximum stability and strength to counterbalance the oncoming waves – helping you stay standing up and in control.

Following this, it was time to learn where to enter the water safely. At beaches that are patrolled by lifesavers (volunteers) or lifeguards (employed), there will be designated swimming areas. This area is identified by tall red and yellow flags. The flags will be set in such a position that they are on a sandbank, meaning the water will be more shallow and the waves will be constantly ‘pushing’ the swimmers back towards the shore.

Lia took the student to have a look at the flags and helped them to understand that the water can be moving parallel to the beach, and she discussed the importance of regularly checking that you are still between the flags while you’re in the water and that you haven’t drifted into any deeper channels or rip currents. Lifesavers and Lifeguards watch the flagged area very closely, so this is the safest place to swim.

Lifesavers are identified by bright red and yellow uniforms, whilst Lifeguards in Sydney often wear a blue and white uniform. If you ever have any questions about the beach, the conditions on the day or if you need help at the beach, for anything from a cut foot to a missing child, they should be your first port of call. If you get in trouble in the water, raising an arm in the air will let people around you know that you need help.

It was also discussed with the students that the best thing you can do if someone else is in trouble is to go and get help for them from someone skilled enough to assist. As a weak swimmer yourself, you are putting yourself in a very dangerous situation if you go in the water to help someone in distress. Many well-intentioned people have drowned trying to rescue someone else. If you have something large and buoyant you can throw this to the person in trouble, but stay out of the water yourself.

To finish the session Lia took the students to the water and they cooled off by putting their toes in the water. It was a hot, sunny, beautiful day at Bondi and it was a treat to feel the cool water. The students rolled up their pants and tested out their boxing stance, often being surprised by the force of the waves.

Lia encouraged the students to take learn to swim lessons if they wanted to become more confident, and safe, in the water.

Lia said it was a real thrill being able to see the students begin to understand the beach – there were lots of photos taken on the water’s edge – and Lia has no doubt that these photos will be proudly displayed to friends and family back home who may never have seen the ocean before. 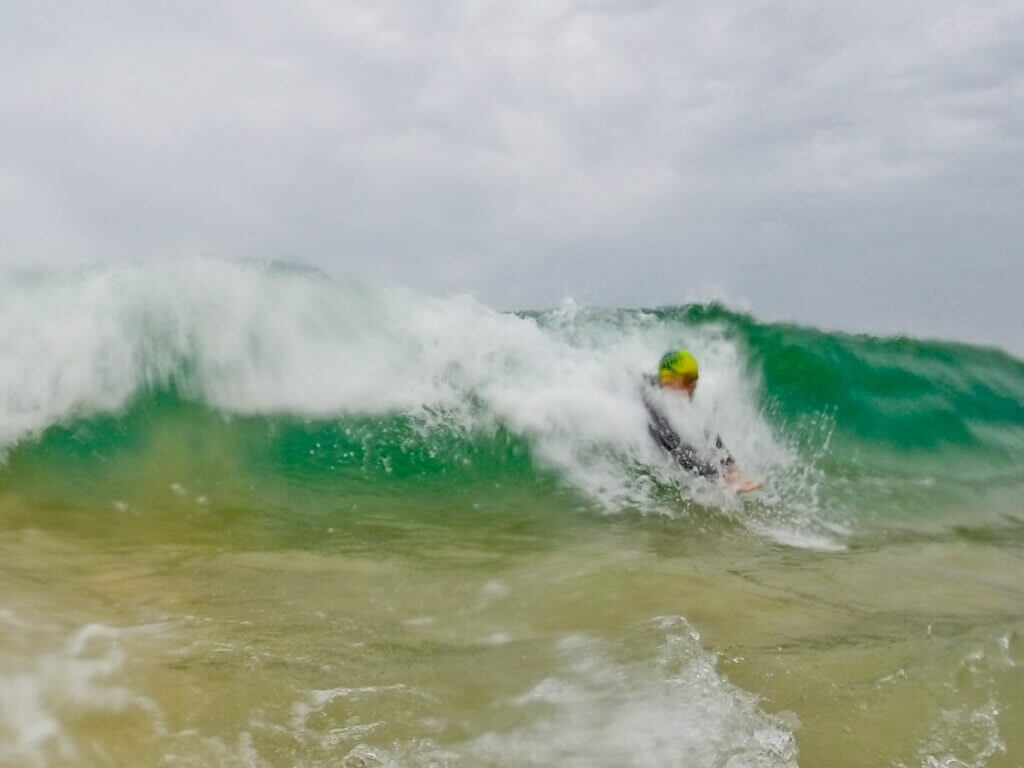