Waves are an integral part of an ocean lifestyle.

It doesn’t matter whether it’s a surfer tucked into a barrel or someone out for a leisurely coastal stroll, we all appreciate them in some way.

But have you ever wondered where waves come from and why they seem to change every day, and even during the day?

Waves are formed by wind. It’s as simple as that. When the wind blows over the ocean, the wind literally grabs onto little bumps on the water surface and energy is transferred from the wind to the water.

As the bumps get bigger, the transfer increases and the bumps turn into waves that keep growing and moving. Waves basically move in the same direction as the wind that formed them.

What’s neat is that there are actually two totally different types of motion associated with a wave. One is the movement of energy through the wave which is what gives the wave its shape. The second is the movement of the water. Every water particle is caught up in these large circular motions underneath the wave.

Think of the to-and-fro motion you experience lying in the water as waves move past you, but you basically stay in place – just like a Mexican Wave at the cricket!

All waves can be described by 3 characteristics: wave height, period, and wave distance (or length).

Wave height is simply the vertical distance from the crest of the wave to the trough. If you see someone surfing a wave that is about double their height and someone only calls it ‘foot’, they have obviously been corrupted by the Hawaiian habit of calling wave height from the back of the wave.

Wave period is the time it takes between two wave crests to pass the same point and wave distance is the physical distance between wave crests. Why do all 3 change? It comes back to the wind. Basically, the stronger the wind blows, the longer it blows for, and the larger the distance over water that it can blow (a sailing term called fetch), the higher and longer the waves will be.

There are also different types of waves. Think of what happens to the nice glassy morning conditions on hot summer days. The onshore seabreeze kicks in and the surf turns to mush. We call these wind waves because they are generated locally and are short, choppy and messy with periods of 2 to 7 seconds.

Wind waves are pretty common in fetch-restricted bodies of water such as Sydney Harbour and Botany Bay. However, in the middle of the ocean, wind waves have room to grow and the further they travel, the more they sort themselves out into nice, clean lines of swell waves which have periods of 8 to 20 seconds.

The longer the swell, the further the waves have travelled. Generally, we always experience swell coming from somewhere, usually the southeast (in Sydney), but if it’s a windy day, we’ll have wind waves superimposed on top. 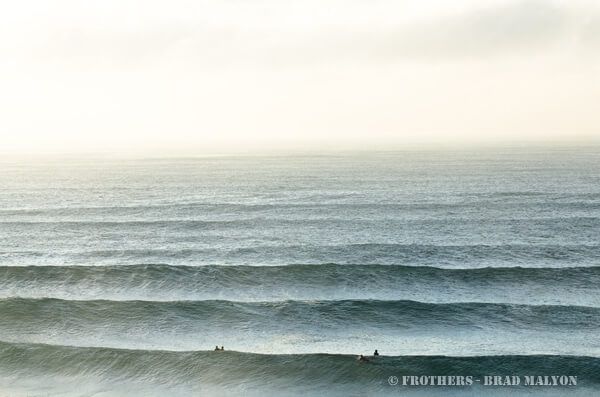 The ocean provides us with endless opportunities to learn from our mistakes, test our skills, and develop our surf sense – if we take the time to reflect.