When I was young my dad bought me and my brothers home a puppy. Tosh, we called him, from his original litter name “Macintosh’. As it turns out, due to his keen nature later in life to regularly jump the fence, squash mum’s garden and disappear for hours on end, Tosh didn’t last long with our family.

But there was one lesson that I learnt from Tosh, with the help of my dad, that helps tell the story of “sink or swim’.

We got Tosh at the end of summer. He was just a little wee thing – with massive feet. By the next summer, Tosh had eaten his way, including through most of mum’s furniture, to a healthy size.

Being a family keen on swimming and sailing it was only right, we thought, that we teach Tosh to be confident in the water. Unfortunately, there weren’t any canine learn to swim centre’s around our town, so it was up to us to teach him.

Dad piled us all in the van with Tosh in the back and we headed for Kaiti Beach. It was where we went sailing and the beach had a large reef with a channel we used to sail through to get out into the ocean.

Tosh enjoyed being at the beach, he ran around, sniffed everything a dog sniffs and chased sticks – it really was a dog’s life.

Except Tosh didn’t chase the sticks into the water, sure he toyed with the idea, getting in up to the top of his legs, but after that, he could only watch as his stick floated around aimlessly.

Sometimes he’d watch other dogs’ race out through the water, happily swimming their way towards the stick meant for him. These dogs would bring the stick back to the beach very happy with themselves. Sometimes I’m sure I could sense a smirk on these dogs’ faces towards the direction of Tosh…

We were never really sure why Tosh wasn’t so keen on the water. The major problem we had was we couldn’t ask him, and he sure wasn’t telling us. So dad had an idea to find out whether he was just finding it hard to take the next step.

We walked Tosh out over the rocks towards the end of the channel. Tosh didn’t suspect a thing, and before he knew it dad had picked him up and thrown him in the channel! For Tosh, it truly was, sink or swim.

Tosh had never been in the deep water before. Up until now, he hadn’t taken his feet off the ground, well except to jump the fence at home and bolt it up the road, mum in chase.

We didn’t know what to expect, we were all there on hand if he needed help, but it wasn’t required. Tosh had seemingly faced his reservations about the water and was actually enjoying it, no doubt he would have surprised himself. I think my brother threw a stick, which he went and retrieved right then and there, before cruising back to the beach.

From that day on Tosh loved the water. We couldn’t keep him out. In fact, we’re sure that on those times when he disappeared after that for hours on end, he had actually run off to the beach for a swim, or the pool for some laps.

Can you relate to Tosh? Are you hesitant about entering the ocean, do you have fears or anxieties that are keeping you out of the water, or from taking your ocean swimming to the next level? Are you unknowingly holding yourself back from being a better ocean swimmer, because you think you know all there is to know about ocean swimming? 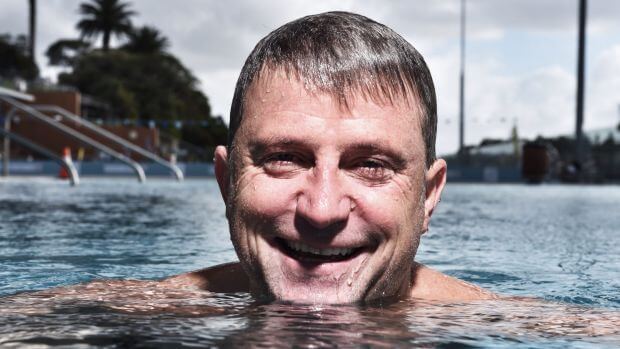 Criminal lawyer Justin Hanby was diagnosed with bipolar disorder in 2013 and he now swims daily as a way to take control of his mental health. This well-known fable is a great reminder to ocean swimmers of all ages, that there’s more to swimming through the surf than speed.