Angus Scott: Road blocks are only as effective as you perceive them to be

How undergoing heart surgery at the ripe age of 33 set off an epiphany that would lead to lofty open water swimming goals.

I had heart surgery last month.

Seems crazy to say that at the ripe old age of 33.

Luckily technology advances meant the surgery was not intrusive and the recovery time was really quick, but it will hopefully resolve the issue I’d been dealing with for a couple of years, Atrial Fibrillation and Atrial Flutter.

Although common in the elder population or with other health issues, it wasn’t something that I was expecting at my age and with my level of fitness. I have since learnt that those who are heavily into endurance sports may be more likely to have this issue, although my cardiologist tells me that the cause of AFib is still not well understood.

My first experience came out of the blue in June 2016 with heart palpitations, dizziness and being out of breath; I was later taken to ER via ambulance and was cardioverted.

Almost 2 years to the day when I was first diagnosed with #atrialfibrillation and my first #cardioversion and now less than 5 months to go until my #ablation to hopefully resolve it once and for all ??Dealing with this #heart #arrhythmia is challenging, frustrating and at times debilitating; my AFib comes without warning or trigger, and can undo my best laid plans for a #swimbikerun ? I’m thankful that my body seems to cope ok with it and that being young & healthy will give me a greater chance of a successful #surgery but my patience is really starting to wane. I’m using my non-race and low intensity training time to firm up my #why when considering an #ironman and also finding time to concentrate on building a base for longer, gruelling sessions next year when I know my body won’t let me down. Trying not to watch the days tick down… #novemberdreaming

Over the next two years, the frequency of AFib increased and I was incredibly symptomatic, and, unfortunately, the medications that I was using to put me back into or keep me in sinus rhythm was losing their effect and cardioversions were no longer a suitable treatment option. Imagine sitting on a train under no stress and yet your heart is beating erratically at 132bpm, and then later (and this was more often the case for me) my heart rate would be beating erratically at 35bpm; my record for highest rate was 195bpm sitting on a couch, and lowest was 31bpm lying in bed.

The impact this had on my life was quite profound given I was in AFib every day with little respite. I was always tired, it would stop any plans I had for a swim session or bike ride, it would stop me mid-training session, it would impact my recovery time, and generally stopped me from really investing heavily in any long-term fitness plans. I just didn’t trust my body to maintain any consistency with the training I needed to do to complete an Ironman or a marathon swim.

So in November of this year I underwent a Catheter Ablation procedure that created scar tissue inside my heart that will block the electrical signals coming from the pulmonary vein which were interfering with normal sinus rhythm. It was a slightly stressful thing to go through (heart surgery!) but I had a great medical team, supportive family, and I just knew that I couldn’t continue to live the way I had – something had to change.

Wasn’t going to post anything as I really just like to talk about how fun open water swimming is…but I guess this is still pretty relevant. Today was Day Zero for me – I finally had my Atrial Fibrillation #Ablation, which means I had #surgery on my heart to help correct the arrhythmia I’ve been dealing with for the last couple of years. My real hope is that this will mean I can come off all meds in a few months, my energy will return, and I no longer have to cancel a swim or ride because I was in AFib. It’s a pretty crazy, unreal surgery given what they can do these days – check out the 2nd pic, it shows where all the ablations (red circles) were applied to my heart to create the scar tissue needed to block the signals causing the problem. Bit sore now (4 catheters in the groin and also had 4 cardioversions while in surgery (shocks to the heart to bring my rhythm back)) but I’m thankful for a great #cardiologist who is on top of his game. More than anything I’m seriously #thankful for my supportive and loving #family. So for now and for the next little while I will dream of returning to the water by living through all of your posts – so keep them coming for my sake!

I had a 3-hour operation (including four cardioversions) and I walked out of the hospital the next day, and I was back in the water within 5 days – how cool is that!

Side note, apparently while under the effects of general anaesthetic I told nurses and doctors that I had swum the English Channel and the Loch Ness hahaha!

Assuming the surgery works as planned with the scar tissue forming over the coming weeks it will mean I can finally set some goals and work to achieve them without any interruption… and only myself to hold me back.

I had an epiphany!

My big epiphany came in September of this year. For too long I had been trying to find a silver bullet to solve my discontent with how I was using my time. It’s hard to articulate, but a combination of feeling a lack of purpose in my work; a feeling that I was losing a sense of self; a feeling that I wasn’t making use of skills and passions available to me; and worse, I was failing to see those same things right inside me.

After reading some really inspirational stories and watching endless documentaries on channel swimming and ultramarathons (Man v Ocean, Adam Walker; Finding Ultra, Rich Roll; Eat & Run, Scott Jurek; Kim Swims Film, etc) I soon realised I was searching for something right in front of me. I love the water, I love to swim, and I get an immediate injection of positive energy after long swims in natural bodies of water, specifically in the ocean. So I just knew I had to make more time for that.

I’ve got some lofty goals. Down the track I want to complete my first Ironman (need to learn how to run first haha!), I want to swim the Rottnest Channel, do the Lake Argyle Swim, and then look at the Cook Strait and Gibraltar Strait.

If I’ve learned anything from the numerous books recently on endurance sports, I need to park the ego at the door and spend time building my endurance (and body mechanics) from scratch. I can swim, but not for that long… I’m not sure I can be alone with my thoughts for that long just yet!

I’ve always been a competent swimmer. I swam squad from an early age and continued this right through school. It wasn’t until I was 16 or 17 that I tried my first open water swim – the swim leg of the Mooloolaba Triathlon as part of a team – but it’s only been in the last couple of years that the lure of the open water has really taken hold.

I’m no longer interested in racing swim events but I am interested in self-growth – either going faster or more efficiently. To that end, my training is less on times and splits and more on stroke, technique, consistency and building time in the water. If I can do that, then the longer events become more of a mental challenge than physical – but the mental aspect will need training too!

To achieve those long-term goals, I’ve set up my 2019 to provide a good launch pad to be ready for, and qualify for, the bigger swims.

Is there anything better than having your family supporting you on race day, and then hearing them talk about making up their own triathlon circuit at home? Um, no. No there isn’t.

The big milestone is my first official marathon open water swim, which is the 11km swim in May. It requires a boat and paddler support, and I’m actually really looking forward to having my family around me on this one. I’ve got four young daughters and I’m excited to show them just what can happen when you’re passionate, invested, and work hard to achieve something.

This is about as vulnerable as I get – an honest photo showing a big weakness of mine, #corestrength. As we all know a poor core can affect a lot of other areas in your body and I certainly can attest to that. Here are my two youngest #daughters helping me through a #coreworkout using @sworkitapps by standing on each foot as I’m struggling through the last #rep. My #beard is weighing me down but also gives me #strength to continue, because #beard. .. “If you always do what you’ve always done, you’ll always be where you’ve always been.” – T.D. Jakes #dailyquotes

Training on the comeback trail

The slow build up in the first part of the year will complement my training in the pool, lake (Brisbane area), and ocean (Mooloolaba and Gold Coast). I try to swim Monday, Wednesday, Friday; cycle on Tuesday, Thursday; and weights on at least 2 days… and then a weekend swim in the ocean if I can.

#cycling is such a great addition to my #training week – and for the (perceived) time poor, using it as a #commute to #work option is ?? My route is 30km with about 300m climbing, so it’s an hour or so ticked off with absolutely no impact on my shoulders…ready to go again for my #swim sessions ?? strongly suggest getting a #bike ??‍♂️✊?#bikelife

Right now I’m still on the comeback trail from the surgery, but each day I’m finding it a little easier to get out of bed in the morning and my recovery time is improving.

My nutrition is really not optimum and it’s an area I can improve, or at least make it more consistent.

I’ve recently started to join the Gold Coast Open Water Swimming Club for their swims on a Saturday morning. It’s a real social vibe with the only agenda of having fun and meeting new people. In January I’ll return to squad swimming in the pool as well with Grimsey Adult Swim Fit.

Chicken Stir Fry is a simple healthy household favourite and it can be prepared in a matter of minutes. 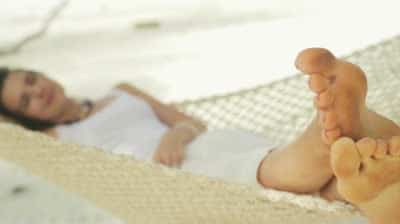 How to get good quality sleep

Swimmers are well known as early risers, so whether you’re up early for squad training or to catch the beach at it’s prime you’ll need good quality sleep.

If you crave big ocean swimming highs then you’re in luck this season with the return of the Stanwell Park Ocean Challenge on Saturday 3 March 2019.

Tide’s in for aquatic events – what’s the salty secret?

The three major trends that should be on the radar for every event organiser, or sponsor, looking to maximise the appetite for ocean events.