Why you shouldn’t swim after it’s rained

Should you swim after it's rained? Learn how ocean water quality is affected by rain running off our streets accumulating nasties along the way.

Ever hear the warning “don’t swim after it’s rained’?

That’s because the rain runs off our paved streets directly to the ocean via the network of stormwater drains, canals and rivers every city has, carrying with it all the nasties accumulated along the way. Then there’s the periods of heavy rain… when water management authorities may decide to “bypass‘ the sewerage system and release effluent directly into waterways!

The major problem is permeability. 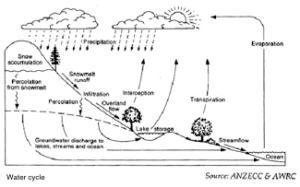 First, let’s go back to science class, remember that hottie who sat in front of you? Forget about it, did you see them on Facebook? Married with three kids, let it go. Think back to the water cycle: Water from rainfall, snowmelt or flooding does not solely move via surface runoff. Water also evaporates, infiltrates and percolates through the rock, soil, sand or other substrates into groundwater or is intercepted by plants and returned, through transpiration, back into the atmosphere.

I’m sure we have all seen or lived in, one of those roomy old houses in the inner suburbs (insert latte-sipping greenie joke here) which has since been demolished and replaced by a towering unit block.

This development is a catch-22 for the environmental movement, on one hand, higher density in urban areas is needed, we simply cannot keep expanding housing outward while commerce and industry remain centralised. In doing this, people are simply exchanging their upfront costs on a house closer to work, school and recreation for the deferred longer-term cost of transportation and all the environmental issues involved such as increased car use and the resulting congestion, fuel consumption and pollution.

On the other hand, inner-urban development often pushes the limit of mandated permeability requirements. Older inner-urban homes often had a front or backyard where water could infiltrate and percolate into groundwater, where it is intercepted or filtered by plants, trees, layers of rock, gravel and sand before finding its way to a larger body of water a lot cleaner than when it started.

While there are many “end of pipe’ solutions, such as litter-traps, nets and grates, these are only part of the solution and can also trap completely natural run-off ingredients such as leaf litter, twigs and branches, which provide nutrients to a healthy waterway. End-of-pipe solutions also do not filter runoff to the degree that natural infiltration and percolation does, a net can’t catch micro-organisms or car oil.

What can you do to help help your waterways?

Indirectly, you can reduce your impact on the amount of runoff reaching waterways – keep your car tuned up (no oil or coolant or other fluids dripping) and use it less, ride your bike, catch public transport. 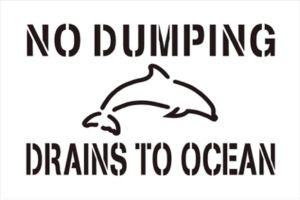 But you know all that, I think you should go all Banksy and print this stencil, cut out the black bits, tape it to the ground near* a drain, and use ‘a piece of chalk’ to leave your environmental message.

Government monitoring bodies issue regular updates on the health of our beaches. Sydney here, Melbourne here. Or search “[your city] beach report’ or similar, for something more localised. Check before you swim.

*by near, I mean right next to a drain, there is a fine line between relevant environmental activism and vandalism, make sure you are on the right side of that line.

A diet packed with vegetables will provide nutrients and nourishment vital to any training program. In this lesson you will learn how to choose nutritious foods based on their colour.

Chicken Stir Fry is a simple healthy household favourite and it can be prepared in a matter of minutes.

The cold can play havoc with your muscles. Learn how to best manage cold water swimming injuries with advice given to professional ironman athletes.